Taekgyeon, which has been prevalent even before the Goguryeo Dynasty(B.C 37 ~ A.D 668), is a traditional Korean martial art featuring supple, curved movements. During the Choseon Dynasty(A.D 1392 ~ A.D 1987) it was a popular martial art that was used as a mechanism for unity among the people, but it was threatened with destruction due to the Empire of Japan's policy to destroy the Korean culture. However, the traditional technique unique to Taekgyeon was restored and established through the bloody efforts of GM Shin Han-seung(the 1st. human cultural Heritage of Taekgyeon).

On June 1, 1983, it was the only one in martial art field to be designated as National Intangible Cultural Heritage No.76. and its historical and cultural value was recognized by the Korean government. Since then, Taekgyeon has been handed down by GM Jung Kyoung-Hwa(the 2nd. human cultural Heritage of Taekgyeon).

Taekgyeon Education Center was established on May 31, 1997 in Chungju city to preserve its originality and promote its tradition, and served to the citizen as a place for learning and enjoying of Taekgyeon

Taekgyeon, the proud martial art of Korea, was selected first as the Resentative List of the Intangible Cultural Heritage of Humanity in martial arts fields on November 28, 2011, as it was proved to be cultural diversity and creativity of Taekgyeon under UNESCO Convention on the Protection of Intangible Heritage executed from 2003. Therefore It is now a world cultural heritage that must be preserved and handed down.

Taekkgyeon is consists of three basic movements, called "Poom-Bahl-Key(step technique)", "Whal-Ge-Jit(hand and arm technique)", "Bahl-Jil(kicking, hooking and sweeping technique). By showing supple, elastic movements based on the rounded form of a curve, the movements are unique compared to most other martial arts that are linear, rigid and strength- oriented. 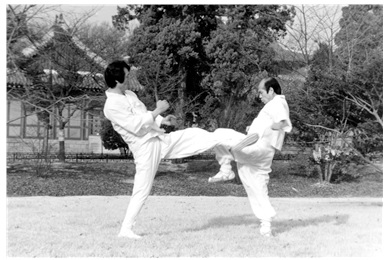